May 17th at 6pm through the 18th at 6pm I birded with Pam Sowizral, volunteer coordinator at Drumlin Farm MAS and team captain, and friends Joanne Normandin, and Mary Brogan and Bruce Black.  As the "Free Agents," we chase some rarities like Manx Shearwater and other rarity reports, but mostly we are free to bird wherever it is good.  This year we decided to spend the 18th birding locally around Concord (influenced by Ludlow G., of course; I had nothing to do with it) and Wayland.  The tyranny of Birdathon is the 24 hour window, which meant a Saltmarsh Sparrow missed the cut by ten minutes on Friday, and a Ruby hummer missed it by 5 minutes on Saturday.

After seeing some of the usual suspects at Revere Beach and Belle Isle Marsh on Friday night, we hit Great Meadows in Concord very early for Least Bittern and rails, but it was pretty quiet overall.  We then headed to the Punkatasset/Mill Brook area of Estabrook woods for warblers and forest birds.  We had some good luck, with Swainson's Thrush, Lincoln's Sparrow, two Black-Billed Cuckoos, many Magnolias, Parulas, Redstarts, a Nashville, two Wilson's, and the star of the morning, a Baybreasted that gave pretty good views.  We then headed into the forest for Scarlet Tanager, Peewee, Pileated, many Ovenbirds, and singing Brown Creepers and a Winter Wren.

Our next stop was the no-longer-obscure Gate 13C Massport Trail on Rt. 62, where we had two more Baybreasteds, many Blue-Winged warblers, a Chestnut-Sided, Prairies, many Towhees and Wood Thrushes, and Field Sparrows.

After all my forced marching, the team was tired and broke for lunch.  Invigorated, we headed to an overlook at Hanscom field to try our luck at Upland Sandpiper.  No dice, but we had numerous Bobolinks and several Meadowlarks, with the local Redtails and Kestrels providing some entertainment. In all, a good Birdathon, with 117 species but notable misses.

Then, Pam noticed a very curious raptor rise off the field, briefly tangle with a Red Tail, then circle rapidly on thermals and move to the north.  Four of us got on it with scopes for about four minutes before we lost it in the clouds.  None of us risked fumbling for iPhones to attempt a shot--it was moving too fast and it was simply too far by the time we realized it was "interesting."  We have proposed an ID and it is currently under review.  But I present our one bit of physical evidence, the sketch and field marks I hurriedly put together after losing it in my scope, without reference to any guides. 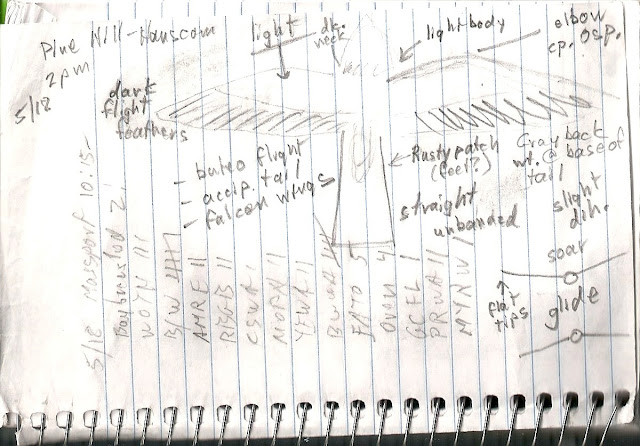 What do you think?

P.S.  Not to shirk Wayland, where we had another Wilson's, Orchard Oriole, killer looks at a Black-Billed, our nemesis Cedar Waxwings, and two Solitary Sandpipers.
Posted by David Swain at 4:13 PM