You know the question.  It's both sincerely curious and not-so-subtly competitive.  I haven't been birding many years (barely seven, I think, and I entered my first eBird list fall of 2009, for what it's worth), but I have a pretty good idea now of what is a "normal" year for me in numbers:  about 220-30 birds in Massachusetts, but about 180 of them in my town alone.  I am a local birder.  In 2012 I chased a bit and saw 249 in my state, but full time work and a family just don't go together with state-wide listing.  Local is where it is at.

Which is why 2014 was so different.  We traveled.  The kids are old enough to appreciate longer trips, and I had a sabbatical from teaching, so it was a great year for seeing new places and finding new birds.

Early July:  my son and I took a "boreal" trip to northern New Hampshire and Vermont.  Yes, it was a bit late for good activity, but we had a great time exploring bogs and spruce forests.  Perhaps the highlights were Cannon Mountain, where we heard both Bicknell's and Swainson's Thrushes; Pondicherry NWR, where we had goshawk, Philadelphia Vireo, nesting Sharp-shinned Hawks, Bay-breasted and Canada Warblers, and Lincoln's Sparrow; and Moose Bog near Island Lake, VT, where we had Ring-necked ducks and Pied-billed Grebes on territory.  The bugs were ferocious and rain drove us home a day soon, but what a great trip.

Late July/Early August:  Yellowstone NP and Grand Teton NP, plus Bozeman, MT and the Gallatin Valley.  The kids adored Yellowstone, particularly Hayden Valley, where we saw many bison, wolves, grizzlies, white pelicans, delightful Japanese tourists, and open skies.  Yellowstone netted me 14 lifers Overall, we were less enamored with Grand Teton, but the birding was good, too, with 5 more lifers.  Back in Bozeman, where we were staying on either end of our trip, we lucked into a local guide who showed us some local hotspots in the Missouri Headwaters Area, and we picked up a few more new birds.

Texas:  my marvelous wife sent me to Texas for the Rio Grande Valley Birding Festival in November.  It is a cliche that first-timers really load up on lifers in Texas, but the cliche is true.  It got 49 lifers in 5 days of birding, and saw 167 birds, more than we saw in Montana and Wyoming combined.  Man, it was fun!

Florida:  Finally, a family trip at Christmas to the Orlando area netted my son and I some good birding time.  We missed most of the birds we had targeted, such as red-cockaded woodpecker and Bachman's sparrow, but saw around 90 birds on sporadic trips near where my parent's live.

Next post will be a year in record shots (some resembling actual photography!).
Posted by David Swain at 10:29 PM 2 comments:

Back from the (sub) Tropics

My family and I had an enjoyable trip to central Florida, and my son and I got out quite a bit locally around the Kissimmee area, seeing around 110 species over the week.  During winter the retention ponds around my parent's condo complex host Lesser Scaup and Ring-necked Ducks, along with many locals: White Ibis, Anhinga, Blue, Tri-colored, and Great Blue Herons, Snowy, Cattle, and Great Egrets, and the ubiquitous feral Muscovy Ducks.  Florida Sandhill Cranes walk the lawns, flocks of Fish Crow fly over, and the trees are full of Palm, Yellow-rumped, and Orange Crowned Warblers.  Sub-tropical birding at its easiest!

However, we had a few goals, one being to try and see Red-cockaded Woodpecker, Bachman's Sparrow, and Brown-headed Nuthatch at the Hal Scott Preserve.  We succeeded only in hearing several of the nuthatches; Bachman's were unresponsive to all means of persuasion, and we lacked time to get deep into the best older growth Long-leaf Pine sections of Hal Scott.  Our consolation was good looks at White-eyed Vireo and four Yellow-throated Warblers (both lifers for Tim).  Hal Scott is really lovely, but it is big, so allow half a day of walking (or take a bike).

Other highlights included a Snail Kite at Riverside Park in St. Cloud (very reliable there), numerous Loggerhead Shrikes (lifer for Tim), Sedge Wren at Twin Oaks Conservation Area in Kissimmee (an excellent new area with great potential), and locally rare wintering ducks, Canvasback and Redhead, also at Twin Oaks.  Finally, after another visiting birder put up an erroneous eBird report for a locals-only communal roosting area (for 240 Fulvous Whistling Ducks, no less!), we visited to find 49 Black-bellied (another lifer for Tim). 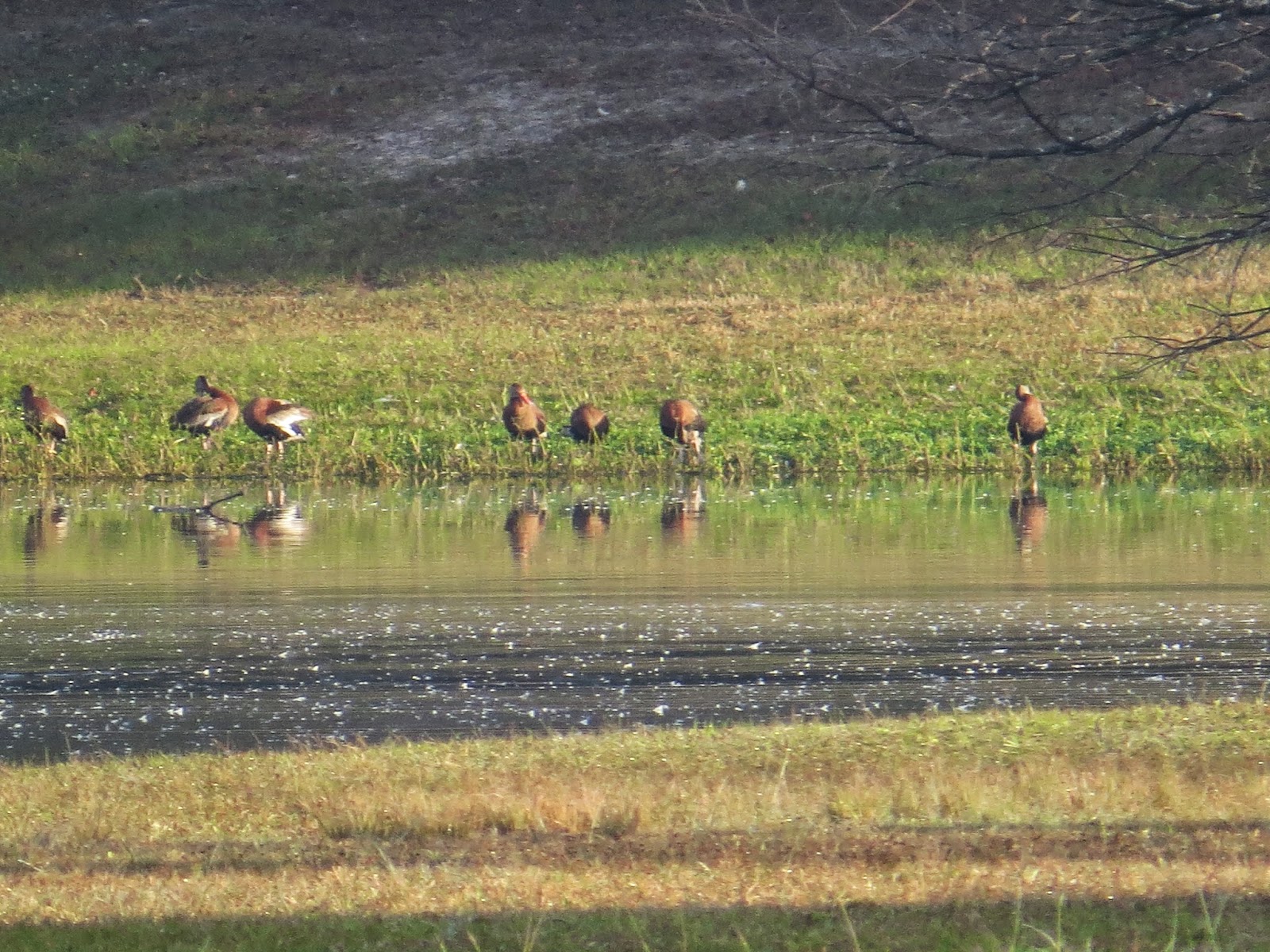 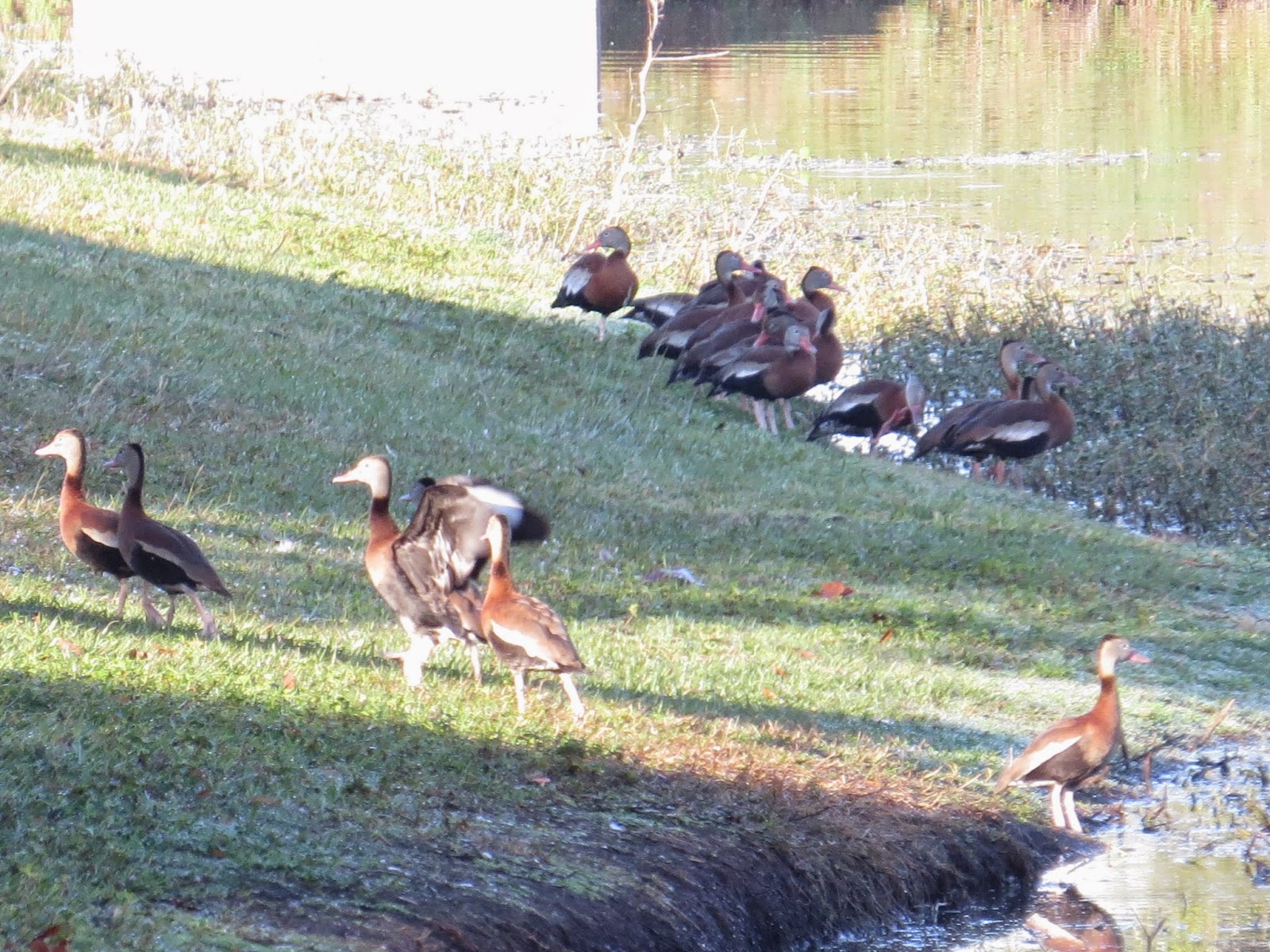 Alas, we never got to the Lake Apopka North Shore Restoration Area, where some Groove-billed Ani continued through the holidays.  Nor were we able to get down to Joe Overstreet Rd. to look for Whooping Cranes (introduced locally and now countable).  But all in all, a lovely, warm, and productive trip.