Carolina Wrens and the Winter of 2015

There is a lot of anecdotal evidence that Carolina Wrens took a big hit this winter in Massachusetts, but I haven't seen anyone offer some hard numbers.  Here is a local perspective drawing on my eBird data from January through May.

On a very local patch level, this winter's effect on Carolina Wrens in my neighborhood was not at all subtle: they were decimated, with none remaining at the end of the storm cycle in March and not a single singing bird through April. Looking through my yard and neighborhood patch records in eBird between January 1 and end of May, I can illustrate what happened with some numbers.

With a sample total of  92 lists recorded between January and the end of May, I can show this break- down by lists per month/lists reporting CAWR/High Counts:

Over this period the Concord Birds Project gathered 204 lists which show virtually the same picture town-wide. These are the recorded high counts by month:

The weather, of course, introduced a lot of sampling error, but birders essentially did what the birds did, concentrated at feeders!

In an average winter my neighborhood has 4-5 singing birds, and this January was not different, with nearly all surveys recording numerous birds. This changed markedly in February, with only the surveys through mid-month turning up the usual birds. The beginning of the snow cycle concentrated the birds at feeders, notably ours and one other that usually sustains a couple birds. Going into the storm cycle we had our usual two birds which over-winter and breed in our yard. Then one disappeared, then one was found in our garage (that -12F morning) in visible distress, then a frozen bird turned up at our basement door (gifted to MCZ).

It was all over by about the third week of March. April was cruelly silent.

Our Carolinas were eating suet regularly and munching on a large nut block (which also sustained a Pine Warbler through the winter), but apparently Carolina's also seek shelter and supplies of arthropods under porches, in crawl-spaces, in garages, and in brush piles.  The deep snow effectively sealed off virtually all of those food supplies. I realized too late that our brush pile had become completely covered.  Carolina Wrens not so much froze as simply starved, I believe, as did a great many other birds, such as Canada Geese, whose food sources were buried or frozen.

May saw a very slow appearance of a few birds, but in unusual areas. I typically hear only two birds in the neighborhood these days. Only one singing bird is, I believe, a survivor, very likely one of the two birds which a local couple (with a huge feeding station) reported had pulled through, so my numbers might be an over-sampling of my very local experience.  House Wrens, on the other hand, have been plentiful.  While this might be because I am paying more attention to wrens, but it could be that they have been able to use good habitats formerly taken by "yard bosses."


Drawing on a wider data set for the eastern counties of Massachusetts, eBird generates this line chart for the frequency with which lists over this period reported Caroline Wren.  Essentially, the species fell off a statistical cliff. 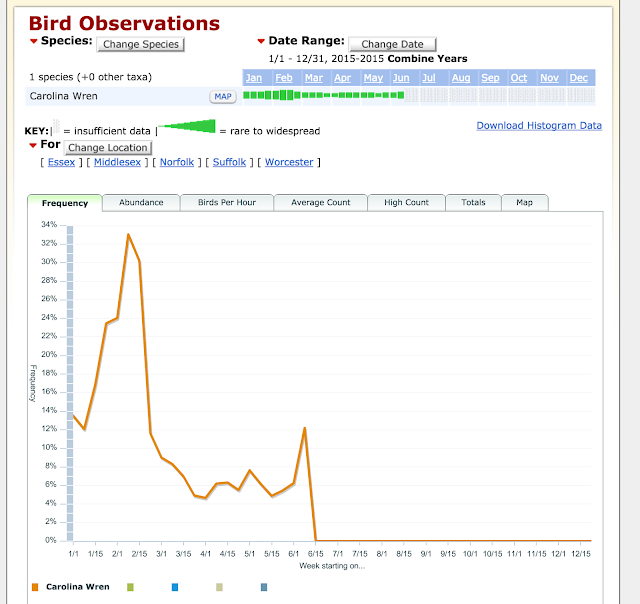 Didn't know Carolina Wrens were in trouble though I get the impression most all birds in America are in decline due to development and climatic events. I have sightings for this guy back Columbus Day Oct. 14, 2014 and Labor Day weekend in Westford MA. Thanks for the report!