My goals for today were to get to Laguna Atascosa NWR at dawn and spend half the day there before working my way down the coast to South Padre Island.  Perhaps it was the impending front, and its sticky, gloomy leading edge, but Atascosa was not quite what I had hoped for.   The Visitor's Center (which I knew would be closed today) seems very overgrown and featured (at least today) primarily Green Jays (not that I am complaining!), Chachalacas, Long-Billed Thrashers, and the ubiquitous Great-Tailed Grackles, which are simply everywhere. I worked the area, including doing the Kiskadee Trail twice, but didn't come up with much except a nice sight of my lifer flyover Scissor-Tailed.  But I am growing fond of these thrashers, which have proven quite photogenic. 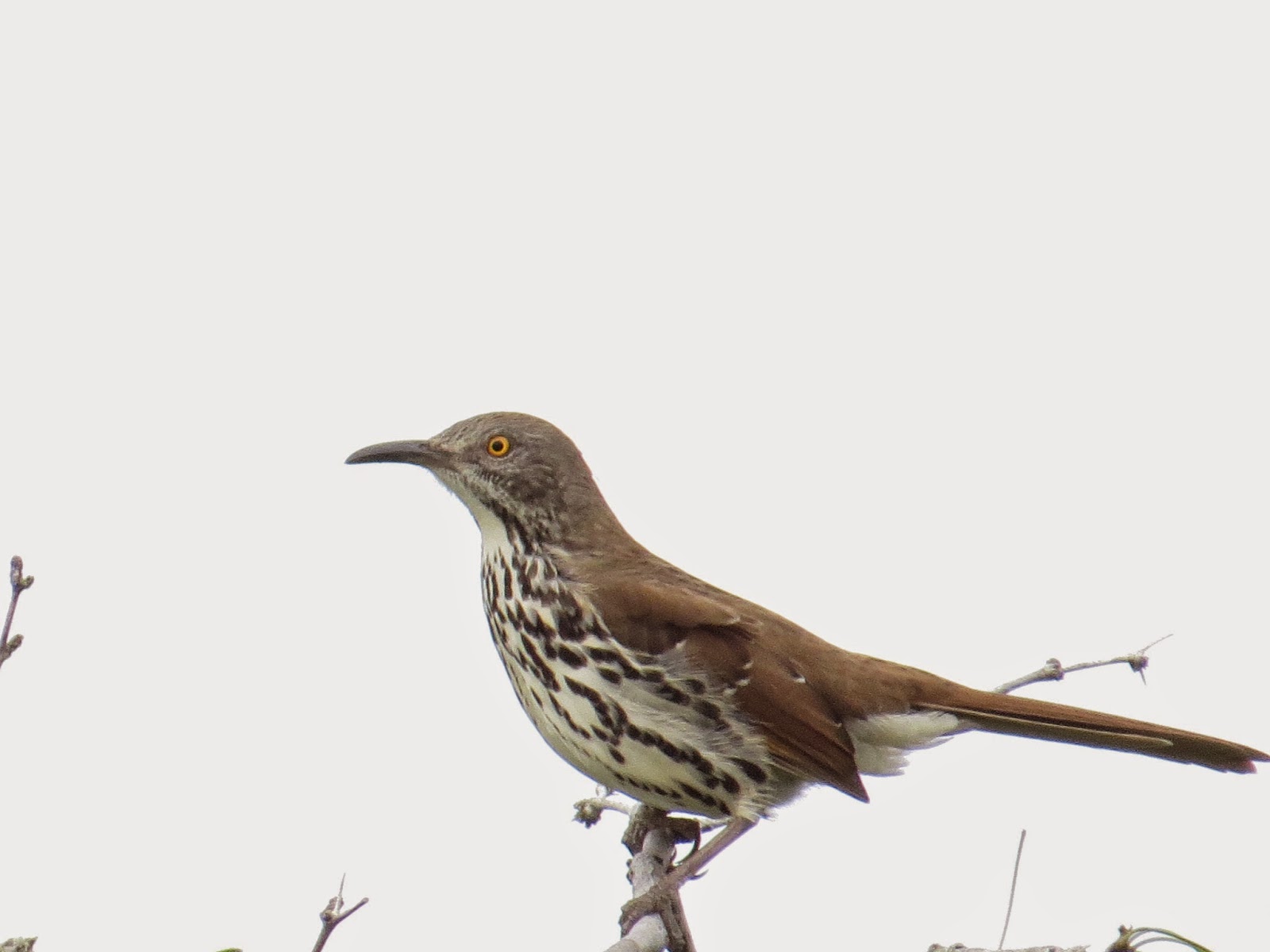 The Osprey Overlook is, I am sure, fabulous in winter, but even now the number of Coots and especially Redheads was amazing: perhaps 400 of the former, at least 2000 of the latter.  With the Bayside Trail continuing closed to protect Ocelots, and Alligator Pond also closed, there wasn't much more to do than drive back down Buena Vista slowly looking for goodies on the wires.  And there were!  Twenty Scissor-Tailed Flycatchers all lined up. 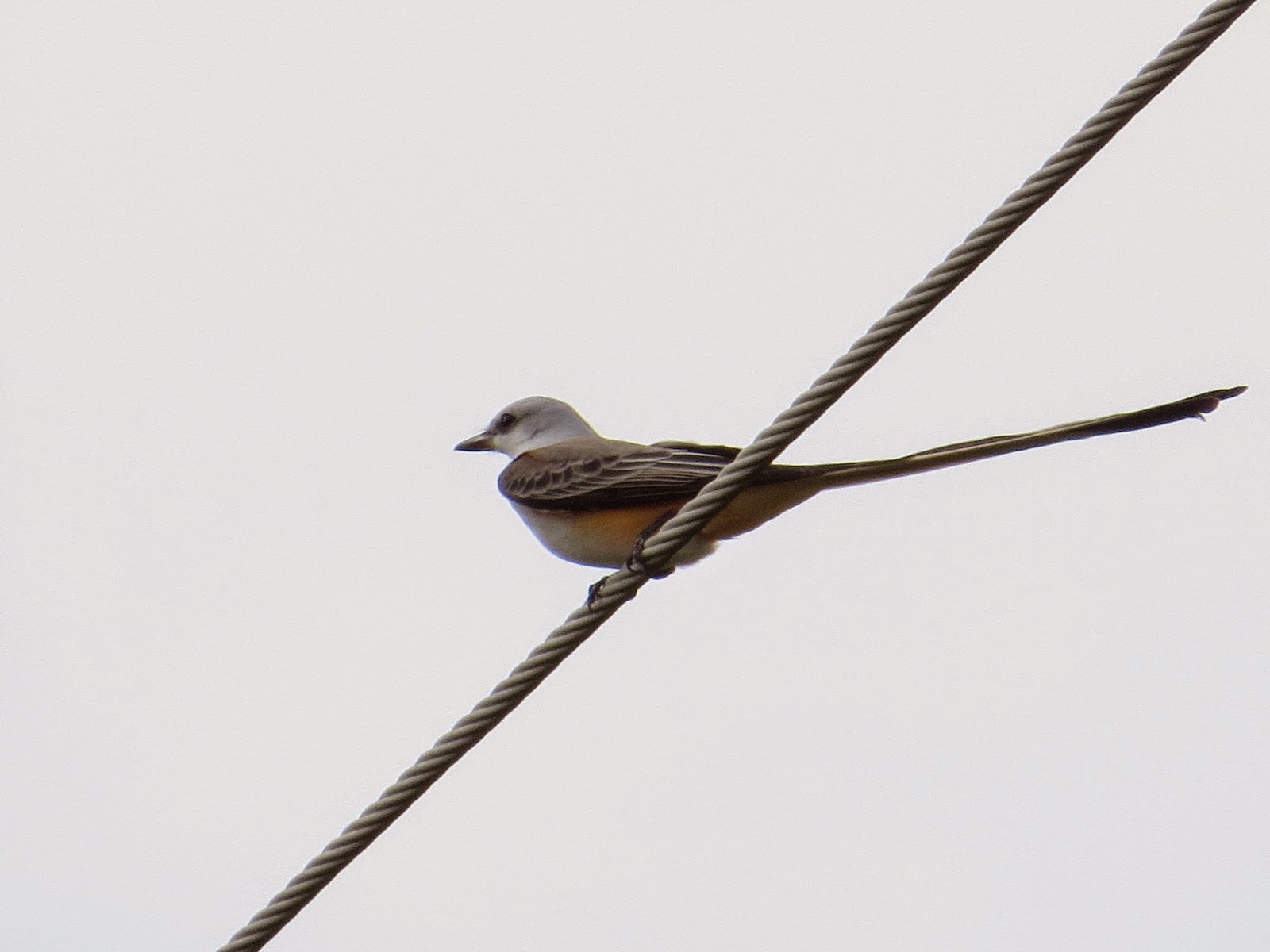 Leaving the Refuge, I continued south on Buena Vista Road into prime Aplomado Falcon territory, hoping perhaps I might get lucky.  Then BOOOM!  A medium-sized falcon explodes across the road chasing something I never saw.  I stopped and got onto it, long enough to see its long, narrow wings and uniform grayish color.  Hardly the lifer look I hope for, but I'll take it.  A few hundred yards later I finally saw a White-Tailed Hawk.

After a very productive stop in Laguna Vista at a lagoon by a waste-water treatment plant (hundreds of Coots, two Black-Necked Stilts, two Avocets, and much more), I headed across Laguna Madre to South Padre Island.  After a quick bite of excellent Mexican at The Big Donkey, I first toured the boardwalk at The Birding and Nature Center, which is adjacent to the Convention Center.  The boardwalk crosses salt pannes and marsh and then the beach and into the bay, with photo blinds everywhere you want them.  It was especially fun shooting terns as they flew upwind.


But the highlight of this stop was finally seeing one of these:
Astonishingly, the thickets around the SPI Convention Center, which have been hosting a Blue Grosbeak and several rare warblers this week, were empty, leaving only hundred of terns and shorebirds to pick through, although I can't complain about seeing 20 Marbled Godwits!

One more stop at the Valley Land Fund Lots turned up an Inca Dove and my first legitimate Tropical Kingbird.

Tomorrow: a pontoon boat ride on the Rio Grande and a tour of Anzalduas State Park.  Zone-Tailed Hawk!
Posted by David Swain at 12:02 AM

Yes you got the curlew, pretty cool looking! The scissortails and thrashers are fun aren't they?