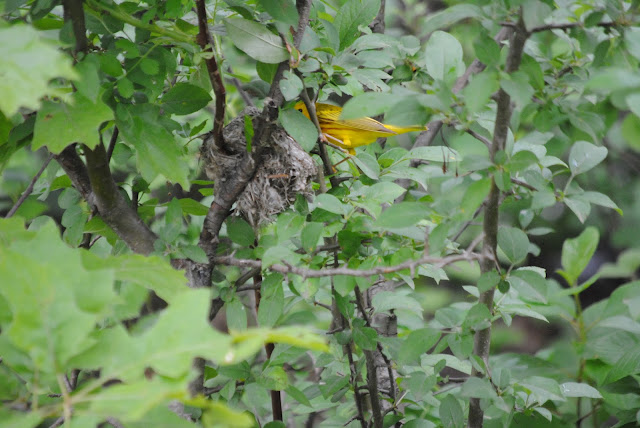 Migration was very busy and I posted little because I was in the field as often as possible.  Overall, this year's migration was a bit strange, with very delayed birds due to some high-pressure blocking patterns which recurred.  These were followed by storms systems and a dump of migrants, especially on days like May 11th when several coastal and inland areas experienced "fall-out" conditions.  The following Saturday was Birdathon, with a significant arrival of Bay-Breasted and Wilson's Warblers, along with many Black-Billed Cuckoos.  Overall, though, migration sort of sputtered along and trees were fully leaved by the time the "good birds" arrived.

I was asked yesterday whether the Concord Birds project "missed anything."  Yes:  Louisiana Waterthrush and Olive-Sided Flycatcher, but those are stretches anyway.  It would have been nice to have had Kentucky Warbler and Red-Headed Woodpecker and Grasshopper Sparrow, but these are recorded infrequently (if at all) in Concord.  Birds that barely registered, however, were more frustrating:  King Rail and Common Gallinule (Moorhen) were observed only a few times at Great Meadows.  It is unknown if Pied-Billed Grebes stayed to breed, but perhaps two pairs of American Coots definitely have stuck it out at Great Meadows.  A potential Worm-Eating Warbler just over the Carlisle line hasn't been confirmed yet.

Our current focus is to confirm (or at least observe) Black-Throated Green Warblers and Hermit Thrush in Estabrook Woods, where they have historically bred in a stand of hemlock east of the Cedar Swamp near the Carlisle line.  This area might contain other scarcities—potentially Blue-Headed Vireo or even Blackburnian (although this species is even scarcer in eastern Mass since Breeding Bird Atlas 1).  Coming soon will be post-breeding wading birds.

Now to Ludlow G.'s list!  My five readers will recall that our year goal was 200 birds.  We are now at 191 (192 provisional pending confirmation of Worm-Eating), which means shorebirds, waders, fall sparrows, geese, and vagrants will push us well past 200 and into the territory of the historical checklist for the area established by Dick Walton in his Birds of the Sudbury Valley in 1984.

Now it gets interesting!
Posted by David Swain at 9:24 AM